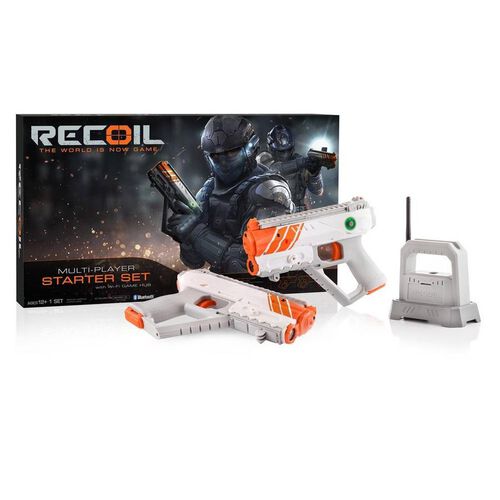 RECOIL turns any outdoor space into a digitally enhanced, multiplayer battlefield. Using in-ear surround sound, haptic response weaponry, and smartphone integrated gameplay, players are able to spawn into the middle of the most immersive battlefield they've ever experienced. RECOIL is defining a new category of AR competitive game play outside. By purchasing the Starter Set — which includes your game hub (a Wifi Router used to create a 250 square foot radius of gameplay) and two RK-Spitfire pistols— you can choose from a variety of FPS-inspired multiplayer modes, including Team Deathmatch and Search & Destroy.

Once you've purchased the Starter Set (necessary to play the game), download the free Recoil app (available for Droid or iPhone), connect your smart phone device to your blaster using the phone clamp, and then pair the two devices via Bluetooth .

Recoil uses your phone's GPS capabilities to create location-based gameplay with the Recoil app. That includes running back to your respawn point when you get killed, picking up supplies at the ammo depot, running to mission objectives such as a bomb defusal point, and much more.

The game also uses the camera's phone to create AR enhancements, so when you pick up an airstrike, your camera is activated, displaying a rocket launcher placed in the real world that you can use to fire off against enemies.

Once you've had some practice, add on to your arsenal with the SR-12 Rogue (a high fire-rate and fully automatic machine with quick ammo reload) additional Spitfires (the compact, versatile and effective handgun), and the Frag Grenade , an actual grenade you can launch at your enemy. With a simple one-button design, the time delayed explosive works off IR technology to emit a high blast radius for anyone nearby. It's the boom that clears the room.

Add up to sixteen players in any one game.

With Recoil, The World is Now Game!