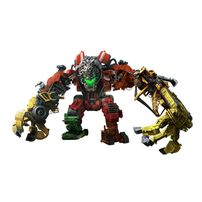 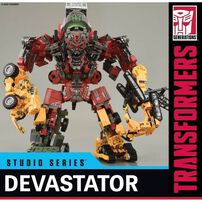 "Reach past the big screen and build the ultimate Transformers collection with Studio Series figures, inspired by iconic movie scenes and designed with specs and details to reflect the Transformers movie universe.

In the Pyramid Desert Battle scene from Transformers: Revenge of the Fallen, the desert sands quake as the Constructicons combine to form Devastator.

This Studio Series 69  Devastator 8-pack features all 8 collectible Constructicon figures inspired by Transformers: Revenge of the Fallen with additional movie-inspired deco that did not appear in the original releases. The figures combine to form the Devastator figure in 11 steps. Figures also convert between robot and construction vehicle modes. Remove extra-large backdrop to showcase the massive Devastator in the Pyramid Desert Battle scene. Includes 3 detailed accessory. Kids ages 8 and up!